PAUL ROBESON AND THE PEEKSKILL RIOTS: THE STRUGGLE CONTINUES 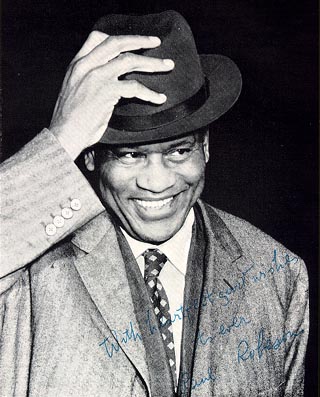 By Harry Targ (the original essay appeared in The Rag Blog / September 4, 2009)

On September 4, 1949, an angry crowd surrounded the 20,000 friends of Paul Robeson who had come to hear him in an open-air concert at Peekskill, New York. After the event right-wing, anti-communist inspired mobs attacked supporters who were leaving the event. These attacks included smashing the windows of Pete Seeger’s automobile with several family members inside. Seventy years later we remember the great progressive Paul Robeson, his struggles for justice, and his refusal to bow to the politics of reaction.

One of the giants of the twentieth century, a citizen of the world, an actor/singer and activist for justice, Paul Robeson has been virtually erased from popular consciousness, a victim of the vicious anti-communist hysteria of the 1940s and 1950s.

Paul Robeson, an African-American, was born to Maria Louis Bustill and William Drew Robeson in Princeton, New Jersey in 1898, 33 years after the close of the civil war and two years after the United States Supreme Court declared in Plessy vs. Ferguson that separate institutions for Black and white people were constitutional. New Jersey, while not segregated to the extent of the deep South, was hostile to the rights of Black people.

Robeson was born into a family with a long-standing commitment to struggle for justice. His mother’s ancestors participated in the underground railroad, bringing escaped slaves from the South to the North. Her family included ministers, teachers, and artisans in the Northern free Black community. His father was a slave who escaped to the north and joined the Union army. As a minister educated at Lincoln University, Robeson’s father defended the rights of Black people in the New Jersey communities where he worked.

Many years later when he was politically active, Robeson would refer to the experiences of his people struggling against slavery and oppression to be free. He likened the struggles of his ancestors to the Black people of his day, and also to factory workers seeking labor rights, and peoples all round the world who were struggling to overthrow European colonial empires.

The young Robeson studied hard, was coached in elocution by his demanding father and performed so well in school that he was admitted to Rutgers University in 1915, only the third Black ever to enter that institution. Robeson graduated in 1919 as valedictorian, champion debater, and two-time All-American first-team football selection.

Robeson attended law school at Columbia University from 1919-1923 but decided against a law career because of the racism he faced at a preeminent New York law firm.

While he attended law school, Robeson began appearing in plays and found his way to the influential Provincetown Players of Greenwich Village. Robeson’s artistic career was successfully launched by his performances in two of Eugene O’Neill’s most important and controversial plays, “All God’s Chillun Got Wings” and “Emperor Jones.” From there his reputation and visibility spread.

By the late 1920s, he appeared in “Porgy,” “Stevedore” and “Showboat,” where he sang “Old Man River,” a song that would have deep political significance for him later on. On tour in Europe in the late 1920s and starring in a London production of “Othello,” in 1930, Robeson had become a star of worldwide proportions. During the 1930s, he would appear in eleven films, mostly British productions, further solidifying his global reputation as an actor.

As his reputation was soaring in the theatre of the 1920s, Robeson came to the realization that the rich musical heritage of his people, then called Negro Spirituals, needed to be celebrated and performed. He thus launched a singing career that would be his most enduring contribution to U.S. culture and, at the same time, would serve as a vehicle for him to participate in the struggle of Black people to achieve their freedom from racism and Jim Crow segregation. Over the next thirty years, he would learn at least a dozen languages and would celebrate the musical traditions of peoples from Africa, Asia, the Middle East, Europe, and Latin America, as well as the United States.

The Politicization of Paul Robeson

By the mid-1930s, Robeson’s outlook concerning the world around him and how the artist must relate to that world had changed significantly. Always aware of racism and segregation, Robeson began to see the oppression of his people as similar and related to the world of anti-Semitism, colonialism, worker exploitation, and attacks on the first socialist state, the Soviet Union.

Leaving a London theatre after a performance of Showboat in 1928, Robeson encountered a massive march of Welsh miners who had come all the way from Wales to demand better wages and working conditions. Robeson spoke to their group and joined their struggle. The mutual love and respect Robeson and the Welsh miners developed for each other would last for the rest of his life.

But it was the escalating Spanish Civil war, fascist armies fighting to overthrow a democratically elected government, that led Robeson to declare his commitment to political struggle on behalf of the dispossessed. In a speech given before the National Joint Committee for Spanish Relief at Royal Albert Hall on June 24, 1937 he proclaimed: “I have longed to see my talent contributing in an unmistakably clear manner to the cause of humanity. Every artist, every scientist, must decide NOW where he stands. He has no alternative.” The artist he said “must elect to fight for freedom or slavery.”

Robeson spoke out for workers, walked their picket lines, and sang to gatherings of trade unionists in auto, steel, shipping, meat packing, electrical, and mining industries who were demanding the right to form unions during the massive organizing drives of the Congress of Industrial Organizations (CIO). He sang of that great IWW labor singer/ organizer, “Joe Hill.” And he sang songs championing racial justice.

After World War II, Robeson met with President Truman and demanded that he take a stand against segregation and support anti-lynching legislation in the South. He already had spoken out against the exclusion of Blacks from major league baseball. Opposing the Cold War and Truman’s refusal to stand against segregation in the South, Robeson joined the campaign of third party candidate Henry Wallace, of the Progressive Party of America, who was running for president in 1948.

Robeson had often visited the Soviet Union, befriended the great Soviet film maker Eisenstein and had spoken with admiration about what appeared to be the lack of racism there. After World War II and as the Cold War was heating up, the U.S. government and right wing groups launched a campaign to stifle the voice of Paul Robeson because of his sympathies for the Soviet Union and his strong advocacy for racial justice in the United States.

He was called to testify before the House Committee on Un-American Activities. Thugs vandalized and beat attendees at the summer Robeson concert in Peekskill, New York. Government agents pressured concert impresarios to stop sponsoring Robeson concerts. And when his public access to audiences declined in the 1950s, even Black churches were pressured to cancel Robeson visits.

The centerpiece of the effort to muzzle Robeson was the decision of the State Department to revoke his passport in 1950. He was forbidden to leave the United States even though he still was a beloved worldwide figure. His passport was not reinstated until 1958 when the Supreme Court ruled that the State Department did not have the right to confiscate the passports of citizens..

Despite his not being able to travel, working people around the world continued to support Robeson. Canadian trade unionists from 1952 through 1955 organized four Robeson concerts at the border between the state of Washington and Canada. Robeson performed from the U.S. side and Canadian workers listened to his music from their side. Robeson welcomed the Canadian workers at the 1952 concert singing his signature song, “Old Man River,” from Showboat. He sang the lyrics he had revised from the original version in the 1928 musical -- from stereotyping of Black people as docile to Black people as fighters for their freedom. Robeson began to insert the newer progressive lyrics in the 1930s when his own political consciousness had begun to change and for the rest of his life he saw the new lyrics as emblematic of his own political transformation.

In 1957, Welsh miners organized a chorus in a London studio and sang to Robeson listening in New York using the then new long distance telephone lines. They always remembered his support for their struggle and they wanted to demonstrate to him and the world their opposition to the efforts of the United States to stifle the voice of Paul Robeson.

After Robeson’s passport was reissued he resumed worldwide travel in the late 1950s. He fell ill in 1961, returned to the United States and for the most part retired from public life.

Robeson believed that peoples everywhere shared common musical forms and common struggles: workers, peoples of color, colonized peoples, women. He celebrated their differences but insisted on their human oneness. Perhaps we need to rediscover that vision again today. He died in 1976 but his spirited call for human solidarity is just as precious today as it was in his lifetime. And, as at Peekskill, those who support human solidarity must be prepared to “hold the line” against reaction.


Let me tell you the story of a line that was held,
And many brave men and women whose courage we know well,
How we held the line at Peekskill on that long September day!
We will hold the line forever till the people have their way.

Harry Targ
I teach foreign policy,US/Latin American relations, international political economy, and topics on labor studies in a Department of Political Science and a program in Peace Studies. I see connections between theory/education and political practice. I am a member of the Committees of Correspondence for Democracy and Socialism (CCDS), the Northwest Central Labor Council (AFL-CIO),and the Lafayette Area Peace Coalition (LAPC). My new book, Diary of a Heartland Radical, can be ordered at http://stores.lulu.com/changemaker I can be reached at targhr@gmail.com