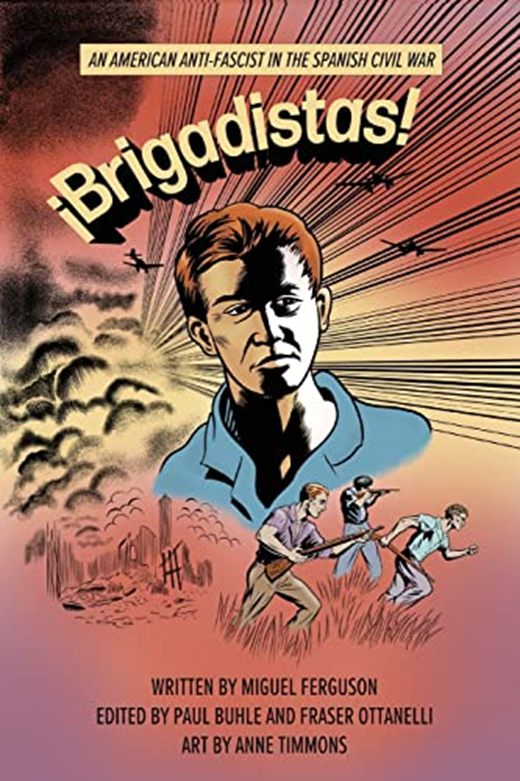 From this valley they say we are going

But don’t hasten to bid us adieu

Even though we lost the battle of Jarama

We’ll, set this valley free before we’re through

(words by members of the International Brigade

Sung by Woody Guthrie; posted with a graphic in

The 1930s was a time of political ferment. Communists, socialists, pacifists, anarchists rose in opposition to poverty, racism, and an ideology that only capitalist markets could serve humanity.

Michael Denning wrote about a “cultural front.” For him the moving force behind the ferment was working class mobilization, particularly in the newly formed trade union confederation, The Congress of Industrial Organizations (CIO). Communists played a leading role in promoting and developing working class militancy in the CIO and on the streets. And Denning suggests, the spirit of militancy, even the idea of class struggle, permeated a broad spectrum of political culture: folk music, jazz, proletarian fiction, photography, paintings, and murals. It was a revolutionary age; at least a potential one.

Some of the radicalism was inspired by worldwide revolutionary ferment, perhaps an idealized image of the former Soviet Union, rising anti-colonial struggles in Asia and Africa, and struggles to defend democracy from the threat of growing fascism. No struggle captured the imagination of radicals everywhere more than the desperate effort of Spanish loyalists who rose to protect their fragile democratic system from the counter-revolutionary forces of General Francisco Franco who fought, ultimately successfully, to overthrow Spanish democracy. Franco’s support came from large landowners, the leaders of the Catholic Church, the military, and most important, fascist regimes in Germany and Italy.

And it is the desperate effort of the defense of democracy in Spain that 40,000 mostly young leftists from 50 countries joined in the military effort to defend democracy. Some 3,000 Americans traveled to Spain to fight fascism. They became known as the Abraham Lincoln Brigade. In a brief forward to this volume Fraser Ottanelli (“The Civil War in Spain and the American Volunteers”) provides a succinct background to the Spanish struggle.

Following the forward this engaging graphic novel, Brigadistas! tells the story of three young communists from Brooklyn who believed the struggle for socialism at home was inextricably connected to the fight against fascism in Spain. And they came to the view that they had an obligation to join the campaign to defeat fascism and racism in Spain.

The graphic novel takes the reader through the life of Abe Rubinoff and his two Communist friends from street protests in Brooklyn and fighting housing evictions by landlords, to debates about pacifism with the iconic Catholic pacifist, Dorothy Day, to the battlefields of Spain. Set against this background the story is largely taken from real characters, real events, and real passion for justice. And the graphic novel, the words and images, brings to life this historic moment that planted the backdrop for political movements in the United States and Europe to follow: defeating fascism in World War Two, supporting communist revolutions in China, Vietnam, and later Cuba, joining the anti-colonial struggles from the 1940s until the 1960s, and defending progressives from anti-communist campaigns in the United States. Survivors of the Abraham Lincoln Brigade became involved in virtually every campaign against imperialism since the 1930s.

The reader/viewer becomes engaged in the organizing efforts of members of the Young Communist League, Catholic pacifists (“Catholic Workers Against Nazi Fascism”) against rising fascism in Europe, and the growing consciousness of young activists about the inextricable connections between war and fascism abroad and the threats to workers at home. The combination of the text, written by Miguel Ferguson, and the artwork, by Anne Timmons, take the reader vicariously back to those days of struggle, triumph and defeat, a consciousness of class and racial solidarity, and internationalism.

As an educational and activist tool, Brigadistas! is first-rate. Virtually every graphic image and piece of dialogue lends itself to thought and debate. For example, on page eleven, Abe and his comrades discuss the international situation, displayed in one panel image, At a political meeting comrades proclaim that “Hitler’s gotta be stopped,” “Mussolini aint just sittin’ around neither,” (as Italy was mobilizing for invasion of Ethiopia) and “Roosevelt ain’t gonna do nothin.” Abe in the panel reports that he read Mein Kampf and says that Hitler “means every word he says.” And finally, he says to his friends that despite Roosevelt’s inaction “that don’t mean we’re gonna sit on our asses while Hitler carries out his plans.” Virtually every panel, as this one, is rich with insight, history, and a topic or topics for discussion.

Paul Buhle, a co-editor of Brigadistas! (with Ottanelli), provides a useful afterword, “The Comic and the Spanish Civil War.” concentrating on the graphic novel genre. It gives a succinct history of the comic format, with its historic artistic roots as far back as Goya’s war paintings, to the war comics of the second World War, to the profusion of graphic novels in our own day. He makes an important point about graphic novels and documentaries of relevance to educators and activists alike: “The emergence of nonfiction comic art as a medium in which to describe historical events and personalities is recent, by most measures, and within the culture of people under thirty, the genre has taken on new and important roles.” (He notes recent publications of a Black Panther Party comic and a three-volume graphic history of the life of John Lewis).

In sum, Brigadistas! is a valuable, accessible textual and visual representation of history. It is recommended for those who are familiar with the Abraham Lincoln Brigade, the Spanish Civil War, and the left of the 1930s and would find refreshing a reminder of its history. And, even more, Brigadistas! can serve as a vibrant tool for political education for those who would be new to the subject. The volume is a useful both for the classroom and the study group. 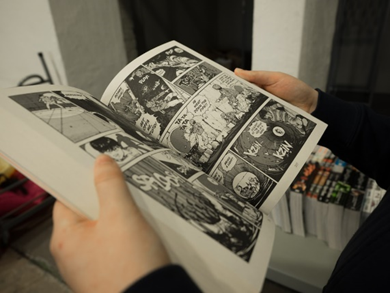 Harry Targ
I teach foreign policy,US/Latin American relations, international political economy, and topics on labor studies in a Department of Political Science and a program in Peace Studies. I see connections between theory/education and political practice. I am a member of the Committees of Correspondence for Democracy and Socialism (CCDS), the Northwest Central Labor Council (AFL-CIO),and the Lafayette Area Peace Coalition (LAPC). My new book, Diary of a Heartland Radical, can be ordered at http://stores.lulu.com/changemaker I can be reached at targhr@gmail.com